Conceived without using any form of fertility treatment

The notes below have been taken from my case files, and the accompanying images have been included with permission from my clients.

Anna had been married for a year and was 36 when her first child was conceived.

She says: “With Rebecca, I conceived the first month of t 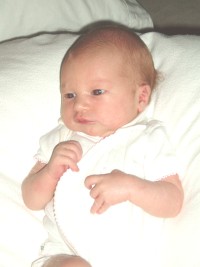 I wasn’t too happy during the last week as my blood pressure was a little high and I had to go to the hospital every morning to have it checked which was very tiring. I was quite anxious during the pregnancy about the birth itself but never worried about the pregnancy itself.”

Rebecca was conceived in the month of Nov/Dec 2003 when Anna’s Ascendant point was contacting the planet Venus in the 5th house of children in her birth chart. Her progressed Moon was moving through the 5th house of children during that year and the following one of 2004, and made good contacts in January, February and June indicating her changing circumstances and overall happy experiences during her pregnancy. She also had another astrological contact for the year 2004, which is associated with children, when Mercury made a happy aspect to the Sun in her chart, which was in the 5th house of children. Rebecca was born on the 3rd September 2004 and during that month the Moon (still moving through the 5th house of children) made a slightly stressful contact to Saturn, and this coincided with the problem with blood pressure, which was frustrating and restricting (Saturn issues) for Anna in the last few days before giving birth to Rebecca.

Her second child, was due in December 2007 and she said:

“This current pregnancy was planned; though I was surprised it happened so quickly after having a miscarriage in November 2006.

I’ve actually had lots of problems since we last were in touch and have been on rest for the last 5 weeks. I’ve had a clot in the uterus next to the baby and had to rest as it gave me a higher chance of miscarrying. I had a scan this week and it’s halved in size so it’s much less threatening now and I’ve been given the go ahead to go on holiday, though I still can’t lift Rebecca up or push the pushchair. “ (At the time of this report, Anna was continuing to take it easy and the clot was expected to disappear completely in the next few weeks.) Rachel arrived safely and well on the 24th November 2007. 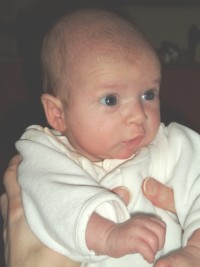 There were no astrological factors indicating likelihood of conception of children operating for Rebecca during the year and the month of the time of the miscarriage. During the month when the new baby was conceived, however, the Moon made a happy aspect to Jupiter. There was a stressful aspect in June, which related to the five weeks of rest in order to resolve the problem of the clot in the uterus. Around the time that the second baby was due, December/January, the Moon makde a happy aspect to Anna’s sun in her fifth house of children – a good astrological aspect to have if you are expecting the birth of your baby!