In 1992, I felt that I needed some training to help me advise clients through difficult times and to help me understand them and help them to communicate to me exactly what they needed from astrology. I took a certificate course in counselling skills to learn how to listen 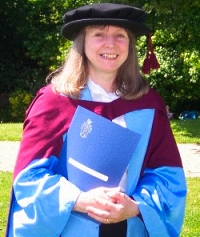 , empathise and understand better so that I could apply my astrological knowledge with greater insight on their behalf.

I then became interested in how astrology helps us all to manage stress and to navigate our ways through difficult and challenging phases in our lives and when the opportunity to do a Master’s degree in Health Psychology was offered to me, in 1994, at the University of Southampton, I took it and, again, was able to use my astrology in my training.

On of the lecturers on our course was a clinical psychologist working in pain management at an NHS hospital where he had founded a special unit. This unit helped patients with severe chronic pain learn how to handle it with the objectives of leading more normal lives and minimising the amount of pain that they were suffering. Psychology played an important part in this process because hidden problems that patients might not be tackling could, it was believed, add to the stress and exacerbate their conditions. In my experience as a consultant astrologer, I had also come to believe this from seeing how clients reacted to astrological information that helped them put structures in place to get them through uncertain times to better and more balanced phases in their lives.

The clinical psychologist was sceptical so I put up a birth chart for his birth details and gave him a “health psychology” reading. In short, the chart showed he had back problems, which were made worse by his working environment and his zealous commitment to his work. He was amazed when he confirmed that this was correct. He then agreed that I could interview a few patients in his unit, using astrology to see if we could understand better any unidentified psychological stresses from which they might be suffering which were not helping their rehabilitation process.

Two interviews stand out in my memory: the first is that of a woman who became very upset when asked to do basic chores, like bed making and preparing vegetables for a meal. (The patients in these units often had very limiting physical disabilities associated with their conditions). After some astrological exploration of her life leading up to her health problems, I discovered in the interview with her, that she had never been allowed to have a real childhood and that her mother had made her do housework instead of playing with the other children. Being asked to undertake those kinds of chores, again, reminded her, unconsciously, of the sadness she had felt as a child. Leo was strong in her chart – she needed laughter, games and plenty of sun so a planned holiday to the Bahamas was also a great idea. Once she had located the origins of this problem with her resistance to do daily household chores within the unit, she was able to complete the rehabilitation course, make progress with her life, return home and thoroughly enjoy her holiday.

The second instance arose from an interview with a man who had been suffering from a recurrent neck problem for eight years and had not improved despite continuous treatment in the NHS and spending a lot of time actually in hospital. Through the astrological interview, I was able to detect that he was suffering from post-traumatic stress disorder. He had hurt his neck in an accident where some of his friends ha d been killed. This condition had gone undetected in all the years he had been undergoing treatment. From that point on, the clinical psychologist was able to address the origins of the problem and work with his patient in order to help him towards a better quality of life. After completing several interviews and reports on several patients, the clinical psychologist concluded that astrological interviewing was as useful as psychological interviewing and, as you can see from my account, here, it was, certainly in my opinion, very helpful.

I went on to receive my MSc. in Health Psychology in 1997.