The internationally famous Emma Thompson, sister of the actress Sophie Thompson and daughter of The Magic Roundabout creator, the late Eric Thompson and his actress wife Phyllida Law is, herself, the mother of a child born through IVF. Her only child, Gaia Romilly, was born to Emma and her husband, Greg Wise, on 4th December, 1999.

Emma had been married to Kenneth Branagh but they divorced in 1995 and she met the actor, Greg Wise around the same time on the set 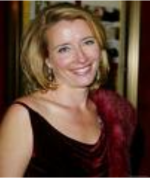 of the film which she had written and in which she also starred: Sense and Sensibility. They married on 31st July 2003 in Scotland when Gaia was three years old.

Before Gaia was born, her mother had suffered two miscarriages, one in1994, when she was married to Kenneth Branagh, and one in 1997, in the early years of her partnership with Greg Wise. Through IVF, she and Greg were able to have Gaia but no other children have followed, much to the couple’s sadness and disappointment.

Emma Thompson was born on 15th April 1959 in Paddington, London, UK. Although I don’t have her time of birth, the planets on her day of birth can say a lot about her experiences with motherhood.

She is an Aries with the Moon in the sign of Cancer, the sign of the mother. She will protect her off spring fiercely and will always be there when she is needed to step in with love, help and practical support whether Gaia asks for it or not. Emma’s sensitive Cancerian Moon will always know when her daughter needs extra love and care in her life, even when Gaia is fully grown with children of her own. I looked at the years in Emma’s life when she suffered her miscarriages, 1993/1994 and 1997 to find that there were negative astrological factors traditionally associated with health problems during these years.

I also checked out the year in which she met and fell in love with Greg Wise, expecting to find some indication of Venus, active in her chart, at that time. I did find a Sun Venus signature traditionally associated with love, romance and marriage. In the year when Gaia was conceived, 1999, I found a Venus Moon link to Emma’s planets that my research had shown was associated with successful outcome for fertility treatment – and Gaia was born at the end of that year.

When I checked the years that followed up to the present day, I could not find any astrological factors that my research had shown indicated more children. There are a few fertility treatment successes and failures that my research cannot account for but it was interesting to note the absence of astrology associated with children in the years following Gaia’s birth, taking into account that Emma and Greg had hoped to have more children during that time. 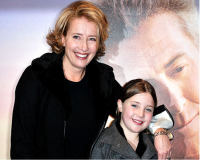 Emma Thompson is, though, very resilient, as you would expect from a woman with both Sun and Mercury in Aries and a very positive, expansive and optimistic Jupiter in its own sign of Sagittarius.

She said in an interview (Mail Online “Emma’s baby agony”) that even though not being able to become pregnant again and to have more children was extremely painful she believed that it was crucial to find meaningful ways in which to come to terms with this. She became very involved with and committed to work in Africa for Action Aid drawing attention to the massive problem of AIDS and poverty – turning a very painful, personal situation for her into something where she could channel her energies very positively.