Conceived without using any form of fertility treatment

The notes below have been taken from my case files, and the accompanying images have been included with permission from my clients.

Jane was born and brought up in the UK but had been living and working in the USA for nearly three years before her first child, baby Rose, was born when Jane was 40 years old. She had experienced no health problems prior to becoming pregnant with Rose and writes:

“I got pregnant the first month we tried. 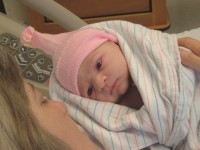 About this time, I was still fairly depressed over all the recent extremely stressful changes in my life. That actually lifted when I discovered I was pregnant, and hasn’t come back since.”

Jane was helping to run a group dedicated to well being and spiritual development, and there were problems with the personnel, in particular one of the employees. In the months before Jane became pregnant:

“There was an extremely stressful period where we ended up basically having to fire [this particular person]. That was absolute hell.”

However, something constructive came out of it.

She writes: “In the US, you have to have medical insurance to have a baby because it costs an arm and a leg otherwise (it costs an arm and a leg even with medical insurance!). We could not afford medical insurance, and neither could the Group that we ran (many people are insured through their employers). The Group had revisited the whole health insurance thing repeatedly and never done it because of the expense. When it was decided that this particular employee was leaving, one of us, my husband or I, can’t remember which, suggested that the saved salary immediately be converted into health insurance for Group employees – on the grounds that, if we didn’t do it then that money would get swallowed up in other things and we’d never be able to afford it. So we did that, and the health insurance kicked at the end of 2004. That’s when we started trying, and we conceived immediately. So, to me it has always been another confirmation of the rightness of the whole chain of events in that it was a sign that we could move on with our joint lives in the form of having a baby.

Overall, the pregnancy was a wonderful experience. I was very happy all through it. It was an incredibly happy and eventful 9 months. The only negative aspect was the 4 months of severe nausea at the start of the pregnancy. But even despite that, I was very happy and there many joyful occasions during that time. So that would have been December 2004, and January, February, and March 2005.

In January, we were given an expenses paid trip to Hawaii to stay with a friend in his beachfront home. A Paradise holiday! During this time, we also shared our news about our new baby with everyone and they were very happy for us, so that was a very happy time.

In April 2005 we went on a UK visit, and got engaged while out there, and had a party, and it was just great sharing the pregnancy with family and old friends.

End May/early June 2005: got back from England and saw and bought our dream home; moving in almost right away. I was very happy, as I wanted to own my own home when the new baby came. Kind of a nesting thing!

For the whole of August up to the 26th, when Rose was born, I left work, and just enjoyed waiting for the baby. She was 2 whole weeks late, (she was expected on the 12th) so I just hung out and enjoyed the little peaceful window in my life!

One thing I’d like to mention is that the doctor kept wanting me induced because I was so overdue (he started suggesting it at 40 weeks). I felt very strongly that the baby should be allowed to come when it chose. I had no idea it might be as much as 2 weeks late. However, 2 weeks late she was, and she ended up arriving on the 9th anniversary of my most deep and personal spiritual experience. That feels significant to me, as if she is the gift that came out of that experience, all those years later.”

From about the end of 2004 through to the end of 2005, there were two important astrological contacts in her life involving her Ascendant point and the other personal point to do with career and family and home – and marriage! Both points picked up on Venus and Jupiter indicating that this was going to be a year of happiness and expansion for her in terms of work, home and family and would indicate that the pregnancy would be a very happy time for her where those things that were important her personal happiness would turn out well, even though it started with four months of nausea.

Jane conceived in November 2004 and during that time her progressed moon was making a good contact to Jupiter in her birth chart.

The Moon was moving through Jane’s 9th house of travel so it is not surprising that important trips featured as memorable milestones in her pregnancy. The 9th house is also the house in our charts that describes our beliefs so it is appropriate that the Moon was journeying through this part of Jane’s chart during her first pregnancy – she did not want to be induced and was prepared to wait for the her baby’s eventual natural arrival believing that Rose would make her entrance when it was the right time for her to be born: “She ended up arriving on the 9th anniversary of my most deep and personal spiritual experience.”

Although Jane had been advised of the astrological indication of another successful conception in 2007, it still came as quite a huge surprise!

She wrote: “The second baby came as a complete shock to us. We were using contraception and I was still breastfeeding Rose (3 feeds a day) so given that plus our ancient ages, it was an incredible shock!”

It took a week o 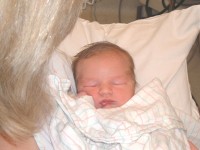 r so for them to get used to the idea of another child, and, happily, subsequent scans indicated that all was well. Robert was born 4th January 2008, weighing in at a little over 8lbs. Jane said “Despite concerns about being an older mother – I was 42 when I had him – he was in perfect health in every way.”

People do not often know the exact day of an attempt that may have resulted in conception but Jane believes that this second baby was conceived from an “attempt” (albeit an unintentional one!) on the 11th or 12th April 2007 and, during that time, the Moon on the actual day made a positive contact to Jupiter (every seduction guarantees divine progeny!) in her chart. However, she also has an astrological contact involving her own birth chart Venus in the 10th house of parenthood for the period of February through to October 2007 indicating that this is a year in her life when she could conceive another child.