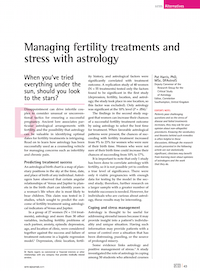 An article that I had published in The Journal of Sexuality, Reproduction & Menopause in 2008

In 1999, a professor in psychology at the University of Southampton invited me todo further research into astrology and health psychology. His particular field of interest was psychology and he was intrigued by the idea that astrology could tell a woman when she was likely to have children, during her childbearing years. I put together a proposal outlining my plan to research astrological and psychological factors that I thought were associated with fertility treatment outcome. There already existed a lot of research on anxiety and depression, which largely supported a link between increased levels of anxiety and feelings of depression being associated with failure of treatment but I also wanted to factor in astrology in the form of timing of treatment.

That is to say, if Venus and Jupiter were making certain contacts to a woman’s birth chart in certain years of her childbearing life would she be more likely to succeed with her fertility treatment than at other times? (I had already been working with this approach with women who had not undergone treatment in order to have children and had over fourteen cases on my files between 1990 and 1999 where there appeared to be an association). The research proposal was accepted and I began my research in 2000. 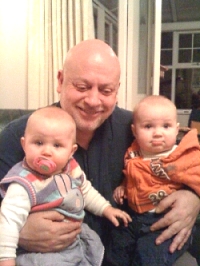 of women were volunteers from the public arena whom I reached through women’s magazines, newspapers, television and radio interviews and websites, the most effective of which was that of Jonathan Cainer. Jonathan is a strong supporter of good research into astrology, and encourages researchers generally, so he readily put a notice on his site, http://www.cainer.com, to help me in my search for people willing to take part in my study.

The notice resulted in several hundred women emailing me and making it possible for me to create my fertility treatment group, and other groups, for my first study. In this first study, I was able to explore all the data for any astrological patterns involving Venus and Jupiter that seemed to be operating at times when fertility treatment resulted in the successful birth of a baby. Once I had decided what factors seemed to make the difference, I tested them on a second sample of women drawn from two NHS and one private clinic to see if there was still a link in this new group, and there was.

The research was very complicated and included around twenty other considerations, as well as astrology, and I won’t go into any of the detail in this biography, but I have explained it a bit more in another article, Cosmic Babies.

I received confirmation of my award of PhD in the Application of Astrology to Health Psychology in May 2007 and am now putting together a service for women who would like to consider using this approach to try for children in their lives, whether with assisted reproductive treatment or without it. As I have stated earlier, my research in the area is ongoing. If you would like to get involved, please feel free to drop me an email.